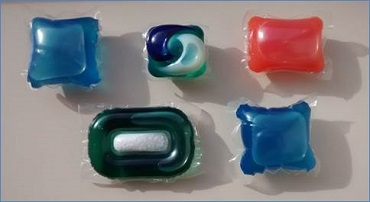 This is following concern at a number of poisoning cases involving young children who have mistaken the brightly coloured pods for toys or sweets.

From now on, the coating of the capsules must contain a “bittering agent” which will make children spit them out within 6 seconds. There will also be stronger packaging which will be more difficult for small hands to open, and larger warnings telling consumers to keep them out of reach of children.

Colourful laundry capsules have become increasingly popular over the last few years, as they are easier to use than traditional washing products. However, they also attract children who may accidently swallow them after mistaking the capsules for toys or sweets, and subsequently cause poisoning.

To protect children from poisoning from laundry capsules, the Commission and the Member States agreed in December 2014 to urgently introduce new safety measures on liquid detergents in soluble packaging. Among other measures, as of June 2015, all manufactures have to ensure that the soluble packaging of capsules available in the EU contains an aversive agent which makes children spit the capsule out within six seconds, if they put it in their mouths.

Capsules placed on the market before June 2015 could be sold until end of 2015. From 1 January 2016 all products on the market will have to fully comply with the new rules.

Similarly to laundry capsules, lamp oil and grill lighter fuels might also accidentally be drunk by small children, particularly children between 1 and 3 years old. In 2010 the existing restrictions in the REACH Regulation were reinforced with new labelling and packaging requirements to attract the attention of consumers to the risks of these chemicals. These requirements focus on providing clearer warning statements, limiting the packaging size and making packaging less attractive for children.

An assessment prepared by the European Chemicals Agency (ECHA) shows that since the latest EU labelling and packaging provisions were put into force, poisoning from these substances has significantly decreased in the EU.

The amendment to the CLP Regulation on hazardous substances and mixtures (Regulation (EC) No 1297/2014) introduces additional safety measures for liquid laundry detergents in soluble capsules, such as using a bittering agent to deter children from putting the capsule into their mouth or making the packaging more difficult to open. Moreover, the packaging has to display warnings that such products have to be kept out of reach of children. These new rules are the result of co-operation between the Member States, the Commission and the industry. A number of companies took a pro-active stance by strengthening their outer packaging already before it became obligatory. See the industry campaign in all EU languages –http://www.keepcapsfromkids.eu/

Since 2000, EU legislation prohibited coloured and scented oils and required that containers for lamp oils and grill lighter fuels had to be fitted with child-resistant fastenings. In 2009 the European Commission introduced new labelling and packaging requirements under REACH (Regulation (EC) No 1907/2006), such as clearer warning statements, limiting the packaging size and making packaging less attractive for children. According to an assessment by the European Chemicals Agency (ECHA) published in July 2015, the number of poisonings has been reduced by 9% per year for lamp oils, and 15% for grill lighter fuels since the new measures were effectuated in 2010. An overall reduction of 75% can be expected by 2020.